Want to know whether the mycotoxins measures made at feed level have been successful? A look at the lesions found in the slaughterhouse could hold the answer. However, the changes present in poultry affected by mycotoxins can be microscopic. 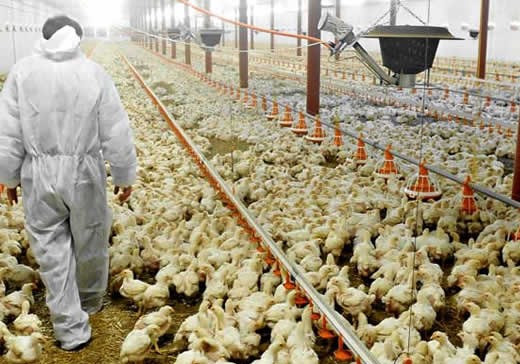 A common concern facing feed mills and poultry production facilities around the world consists of determining if the mycotoxins present in feed ingredients or in the rations are affecting perfor¬mance. Producers that have already decided to use anti-mycotoxins addi¬tives, wonder if their decision is eco¬nomically wise. Considering that mycotoxins detection in feed frequent¬ly provides inconsistent results, due to their uneven distribution, one practical approach for evaluation is the identifi-cation of lesions in the slaughter hous¬es. This search will confirm their pres¬ence for companies that may have any doubts about their existence and will also serve to demonstrate if the preven¬tive measures taken are effective. In this article we will review some of the macroscopic changes present in the birds affected by mycotoxins with the objective of offering another tool to evaluate their incidence.
It is important to emphasise that besides evaluating these lesions, perfor¬mance results must be taken into con¬sideration in any type of evaluation.

Plaques and ulcers in the oral cavity may be produced by several mycotoxins belonging to the group of Trichothecene, including T-2 toxin, MAS (monoacetox- yscirpenol) and DAS (diacetoxyscirpe- nol). During the first stage, the damage appears as focal with the development of yellow, oral plaques that become ulcers located in different parts of the mouth (palate, tongue, floor of the mouth, sali¬vary duct openings, and the interior margins of the beak). Lesions in the mouth are more frequently seen after long-term feeding, generally in pullets, but if the concentration of T2 is high enough, lesions will appear sooner. Under commercial conditions it is more difficult to detect them in younger birds (4 to 5 weeks). Since the head is usually severed and placed apart from the rest of the carcass at the slaughter house, meat inspectors or veterinarians usually do not evaluate it Typically, the presence of the oral lesions already described is the best way to reconfirm that mycotoxins are affecting a flock. Essentially, this is a lesion mainly produced by mycotoxins. The presence of wheat deposits in the corner of the mouth is a condition that must be ruled out in a differential diag¬nosis in areas where this grain is added to the diet.

Proventriculosis consist on the enlarge¬ment of the proventriculus, and proventriculitis compromises the inflammation of the internal surface. Here we concentrate on proventriculo¬sis because it is easier to identify with¬out opening the organ in the slaughter house. Cyclopiazonic acid (CPA) pro¬duced by Aspergillus flavus, the pre¬dominant fungus responsible for Aflatoxin production, is the main mycotoxin associated with this pathol¬ogy. The inflammation of the proven¬triculus or its enlargement can be the result of over stimulation of the glands responsible for hydrochloric acid secre¬tion. Fish meal and biogenic amines (present in bone, blood, meat and feather meals) can produce some degree of proventriculitis, depending on the inclusion rate in the diet. Pathogens like Marek’s Disease, Reovirus, and the Infectious Proventriculitis Virus associated with Infectious Bursal Disease (IBD) are responsible for this lesion in infected birds. Another post mortem finding is gizzard erosion. Among other entities, it can be due to mycotoxins such as T2, MAS, or DAS. Their caustic effect is responsible for the necrotic damage observed in the mouth, gizzard and intestines. Copper sulphate, biogenic amines present in bone, feather, blood and meat meals, as well as fish meal, can cause some degree of erosion.

Haemorrhages and enteritis can be pro¬duced by mycotoxins, as well as many other elements including viral infections (Reovirus), bacterial pathogens (Escherichia coli, Salmonella, etc.), and nutritional factors. In severe cases, mycotoxins such as T2 toxin can pro¬duce petechial haemorrhages that spread along the intestines (small and large). During the process of sacrificing birds in the farm or at the slaughter houses, the presence of haemorrhages in the form of petechiae (tiny pin point, 1-2 mm in size), or ecchymoses (large bruises, 2-3 cm in size) in the duodenum, is some¬times confused with lesions caused by mycotoxins (T2 toxin, DAS, MAS).
One common lesion that must be ruled out when establishing a differential diag¬nosis is the presence of agonal haemor¬rhages, a normal post mortem change present in some birds, associated with death struggle.

Generally, the liver of healthy young birds (broilers and pullets) is of a brown colour with a compact appear¬ance. Yellow or pale livers can be caused by Fatty Liver and Kidney Syndrome (FLKS), a condition that occurs in 1 to 4 week-old broilers and is associated with biotin deficiency. Affected chicks show growth depres¬sion and fatty infiltration of the liver, kidney and heart without the presence of the characteristic signs of a biotin deficiency. On the other hand, the pres¬ence of fatty or pale livers has been associated with the used of bad quality oil (oxidized fat) in the ration. The use of antioxidants in the feed has been considered as a positive measure to help reduce its incidence. Fatty liver haemorrhagic syndrome (FLHS) is characterised by the presence of exces¬sive oily fat deposits and haemorrhage in the abdominal cavity with enlarged, friable, pale/yellowish livers. The liver can become so fragile that it is difficult to remove each lobe without causing its breakage. This condition is considered one of the most important metabolic disorders commonly reported during the production period in commercial layers. Typically, even healthy flocks will show layers affected by FLHS after 45-50 weeks of age. When FLS (Fatty1 Liver Syndrome) is produced by myco¬toxins (mainly Aflatoxin) birds show a yellowish appearance with petechial haemorrhage but no excessive abdomi¬nal fat is present. Another difference is that typically, abdominal haemorrhage is not necessarily present. The main target organ of Aflatoxin in poultry is the liver, causing yellow discolouration due to lipid accumulation as a result of the impairment of the liver capacity to synthesise amino acids. In one scientif¬ic trial performed in chickens where 100 ppm of Fumonisin was added to the diet, the liver size nor its colour were affected. In addition, the presence of pale bile content (bilis) has been associated with Aflatoxin. A reduction in amylase, lipase and biliary salts pro-duction by the liver is responsible for that appearance of the gall bladder.

This is also a somewhat fairly common lesion affecting carcasses in slaughter houses in many regions. The main mycotoxin associated with bruises in chickens is Aflatoxin, which is charac¬terised by increasing capillary fragility and the reduction of shear strength of skeletal muscles. Aflatoxin interferes with coagulation by affecting some of its components, mainly prothrombin, a key factor in the reaction cascade nec¬essary to complete the wrhole process. Experimentally, Wyatt in the US has reported that concentrations as low as 100 ppb of Aflatoxin cause bruising in broiler carcasses. Some recent reports from Brazil indicate that Fumonisins are associated with a higher incidence of skin haemorrhages in chickens. High density (number of birds per square meter) is a common reason for this lesion under commercial conditions. Besides mycotoxins, improper stunning in the slaughter house can result in incomplete bleeding, wrhile excessive stunning can increase the presence of haemorrhages as a result of ruptured arteries and capillaries.
Urate deposits and swollen kidneys can be induced by Ochratoxin. Viral patho¬gens as nefropathogenic strains of Infectious Bronchitis (IB), excessive levels of calcium in layer diets and lack of water can be responsible for urate deposits in kidneys and other structur¬al damage to the organ. For decades the tropism for kidneys has been rec¬ognised for strains such as Gray, Holte, and Florida 88. Lately, new Chinese strains as QX and Ql have been associated with renal lesions in China, Europe and Latin America. Reports of the effect of Citrinin in the kidney under commercial conditions are not as com¬mon, even though some personal com¬munications indicate the involvement of this mycotoxin in the presence of watery faeces and wTet litters.

Table 1 includes some of the organs that should be evaluated weekly or monthly in the slaughter houses to detect the effect of mycotoxins in the field. It is important to emphasise that even the most efficient mycotoxins binders available in the market will not adsorb 100% of the mycotoxins present in the feed, so the detection of some degree of lesions is expected w’hen mycotoxins are present in the feed. At least 200 to 300 carcasses should be examined and periodically some tissue samples should be evaluated using his- topathology. The inclusion of the eval¬uation of the Bursa of Fabricius in the table presented, if possible, will offer important information on the status of the immune system. 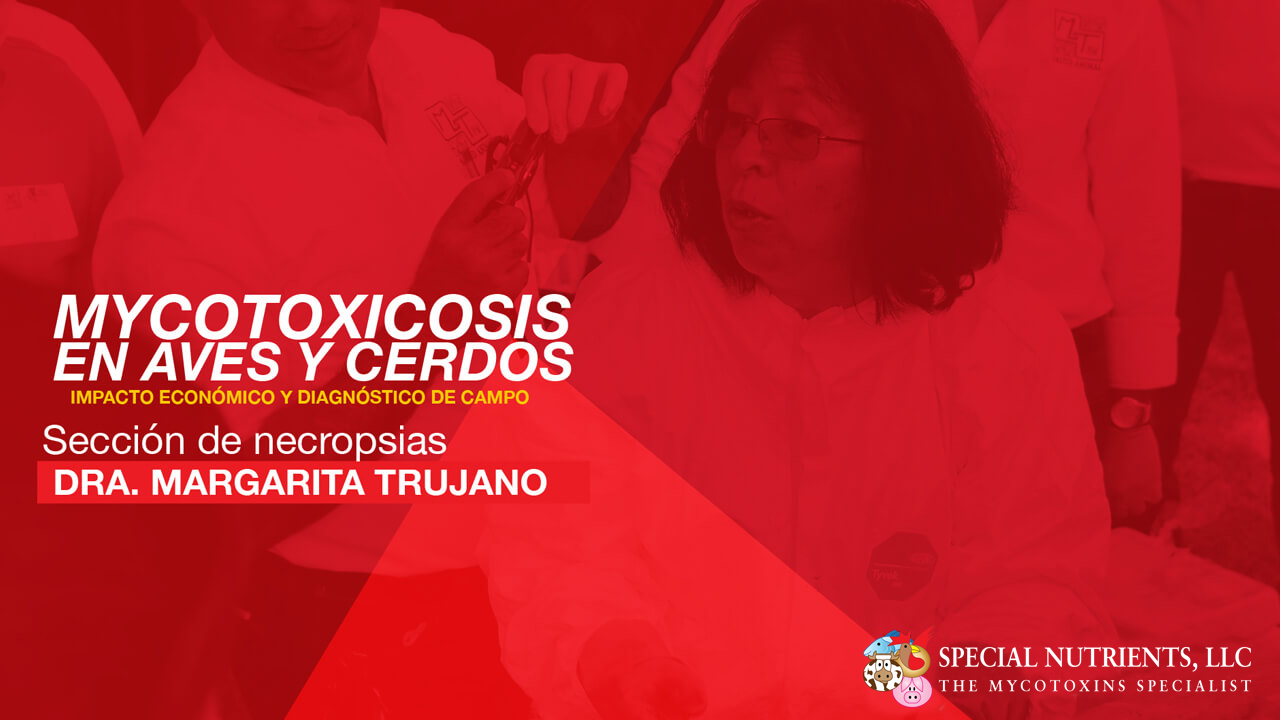 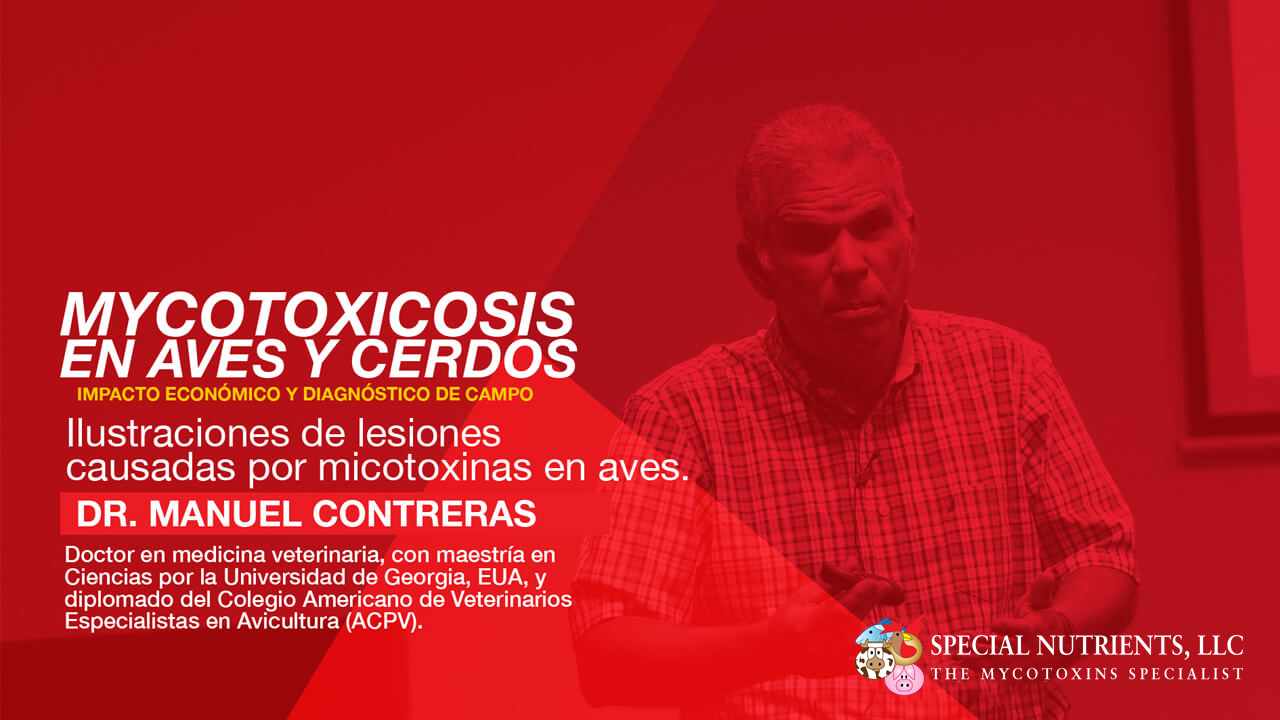 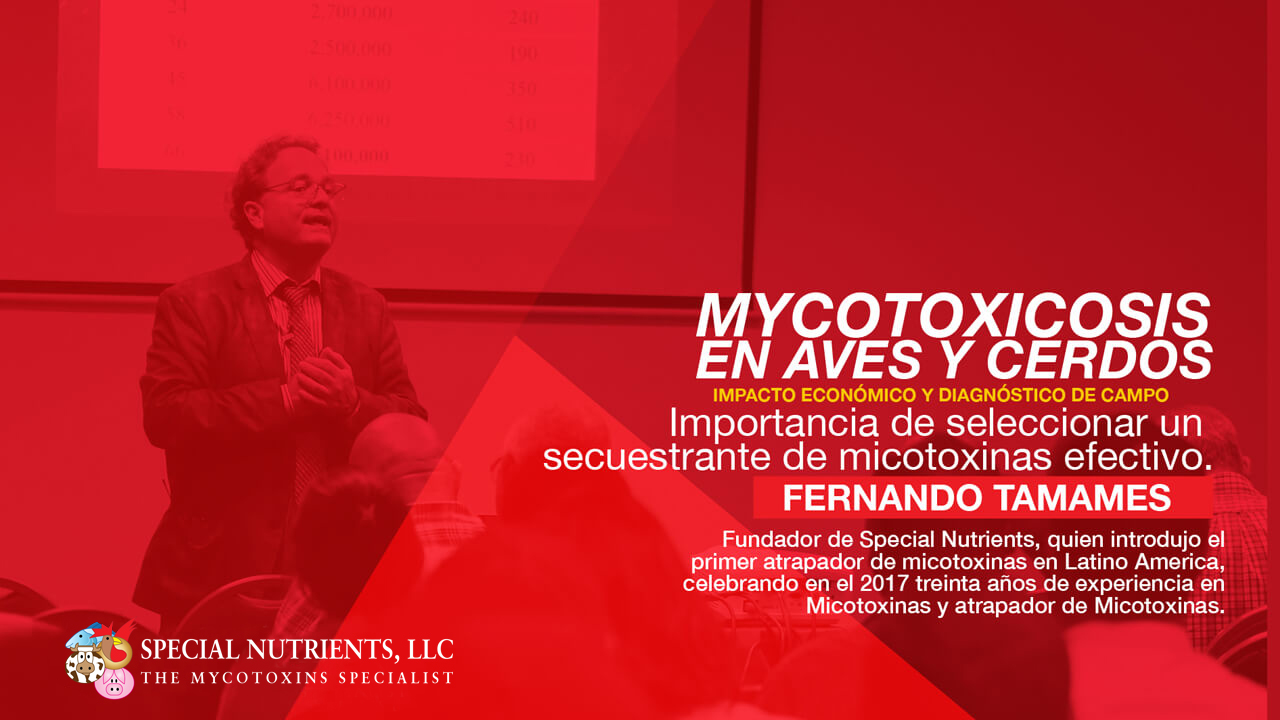 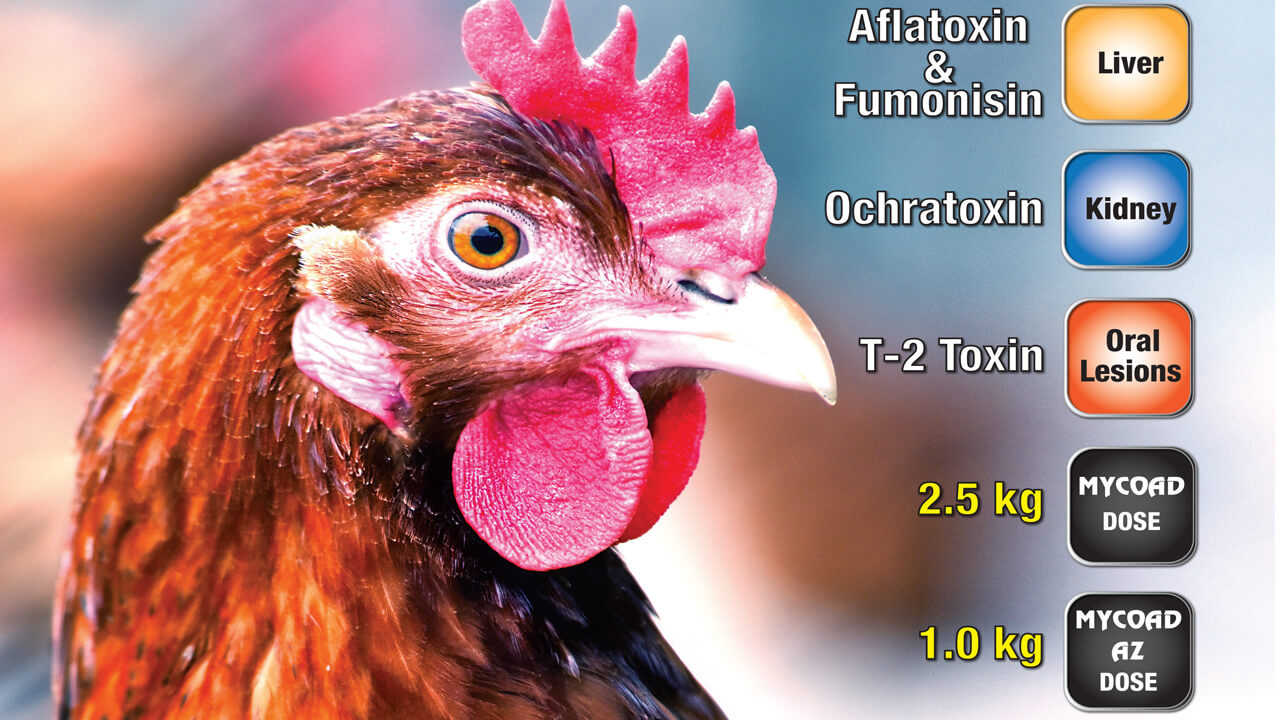 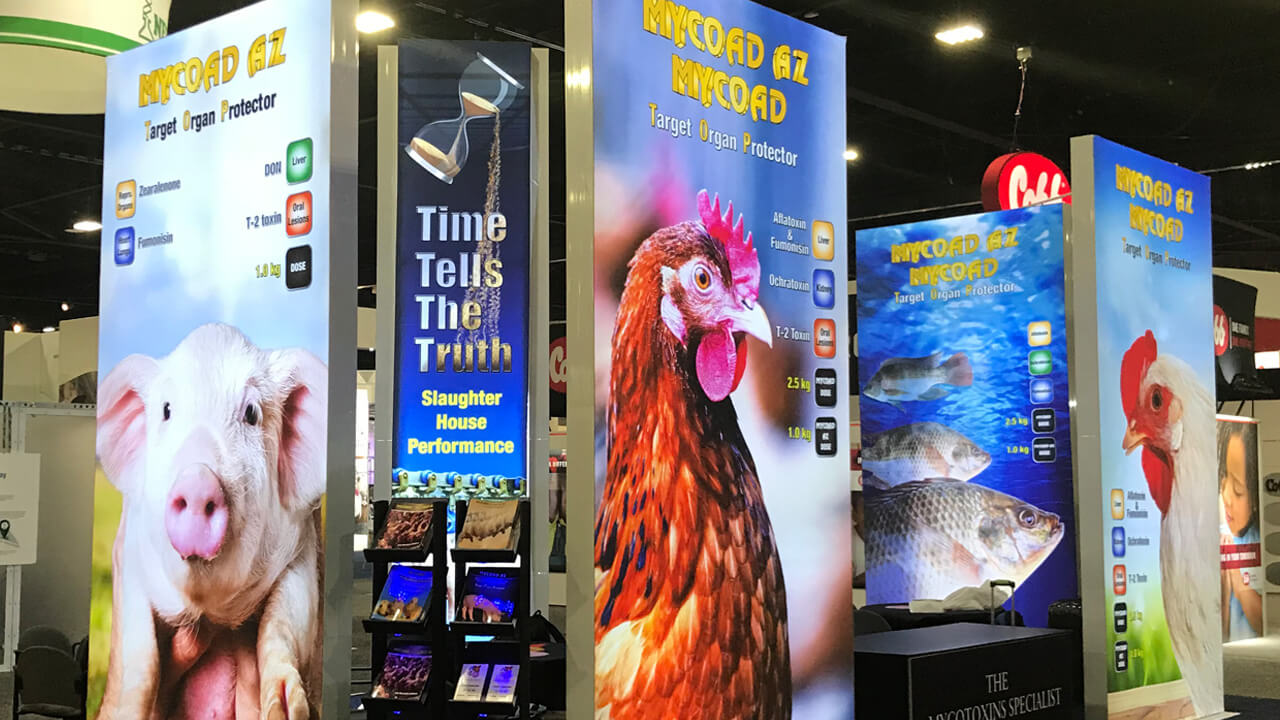